A huge thank you for everyone’s hard work – it paid off today when Governor Wolf signed the 2022-2023 budget that includes a $525 million increase in Basic Education Funding (allocated using the Fair Funding Formula) and a $225 million increase for Level Up.  These two increases will mean more than $59 million in new state support for Lehigh Valley school districts (including $35.6 million for Allentown and nearly $9 million for Bethlehem).

While more than double the increase in last year’s budget, there’s still a long way to go before Pennsylvania public schools are fully and fairly funded.  But this is at least a meaningful step in the right direction, so we get to celebrate even as we gear up for more advocacy next year.
Below is a detailed breakdown from Education VOTERS OF PA of the key pieces of the budget involved with education…THE GOOD, THE BAD AND THE UGLY! 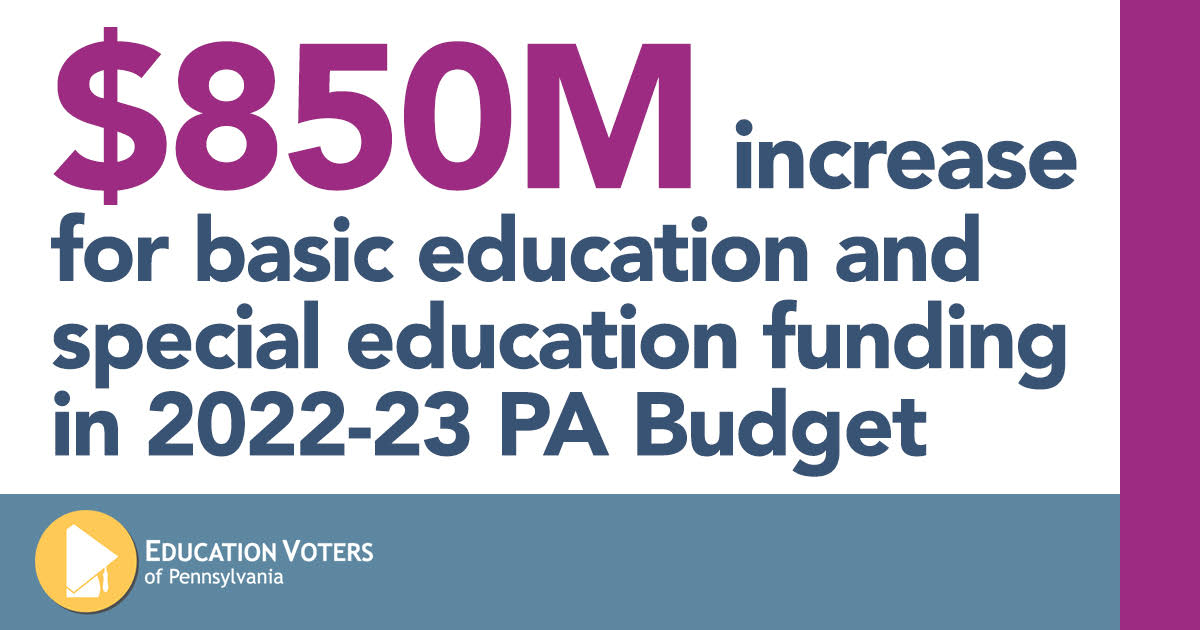 K-12 schools will see a significant increase in funding under this budget including the following:

$6.1 million for career and technical education

Click HERE for estimated basic and special education distributions for each school district.

Click HERE for the estimated distribution of school safety and mental health grants for each school district.

The Pennsylvania State System of Higher Education (PASSHE) will receive:

PA Community Colleges will receive an $11 million increase, about 4%

PHEAA will receive a $45 million increase (a 12%, increase) to provide additional financial support to students

“It’s On Us” Sexual Assault Prevention will receive $1.25 million 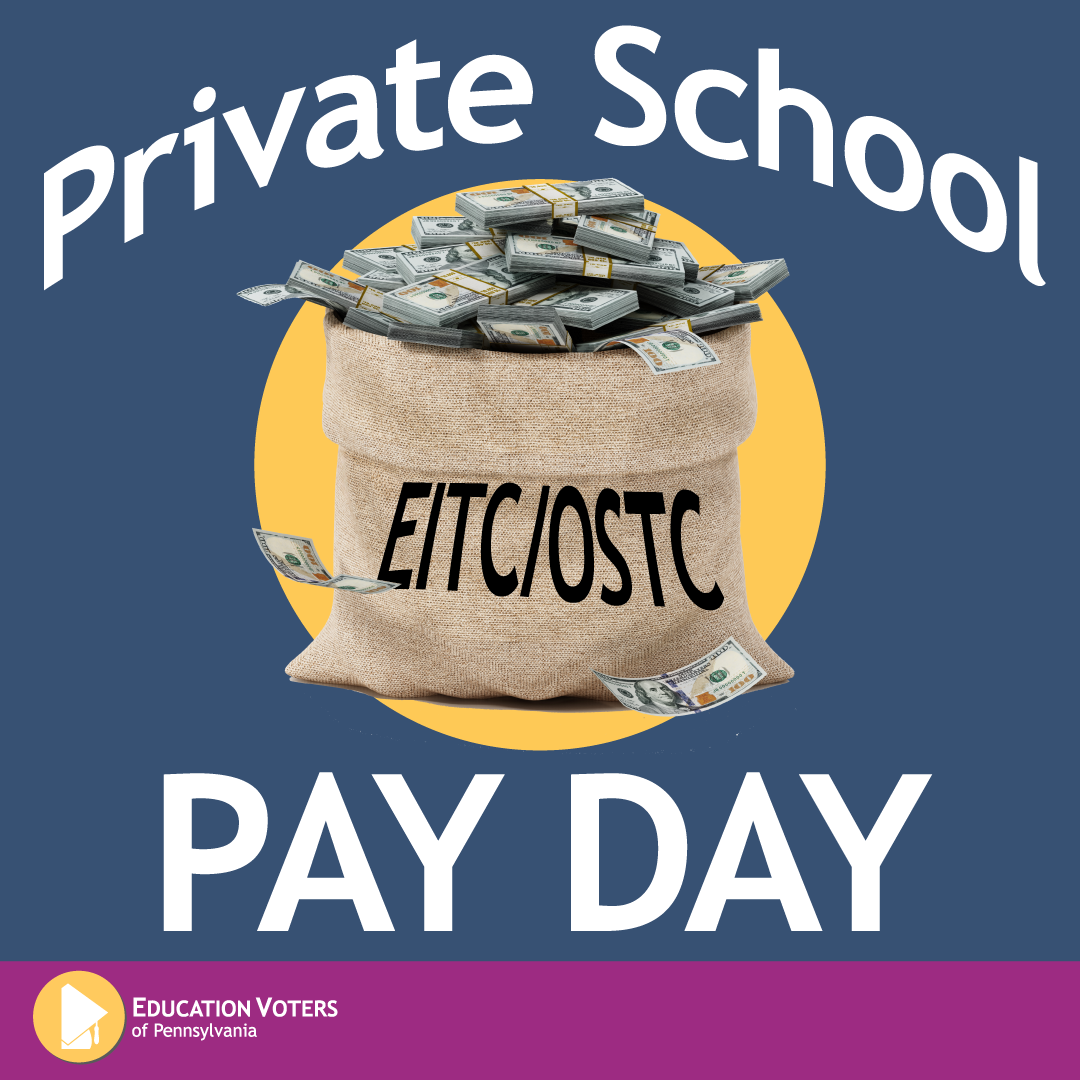 The budget increases the amount of tax credits available for private/religious school vouchers in the unaccountable Educational Improvement Tax Credit and Opportunity Scholarship Tax Credit (EITC/OSTC) programs by $100 million to a whopping total of $330 million per year.

There is virtually no state oversight over these dollars and there are no academic standards for schools that receive the tax dollars. Vouchers are used to subsidize the education of well-off children in elite private schools and they are used to pay for tuition at religious schools that use the Bible as the basis for all teaching and discriminate against children because of their beliefs. And–“scholarship” organizations are allowed to skim off and spend and eye-popping 20% of this funding in any way they please.

Learn more about these vouchers in our brand new EITC/OSTC FAQ document that we co-authored with the Keystone Research Center HERE. 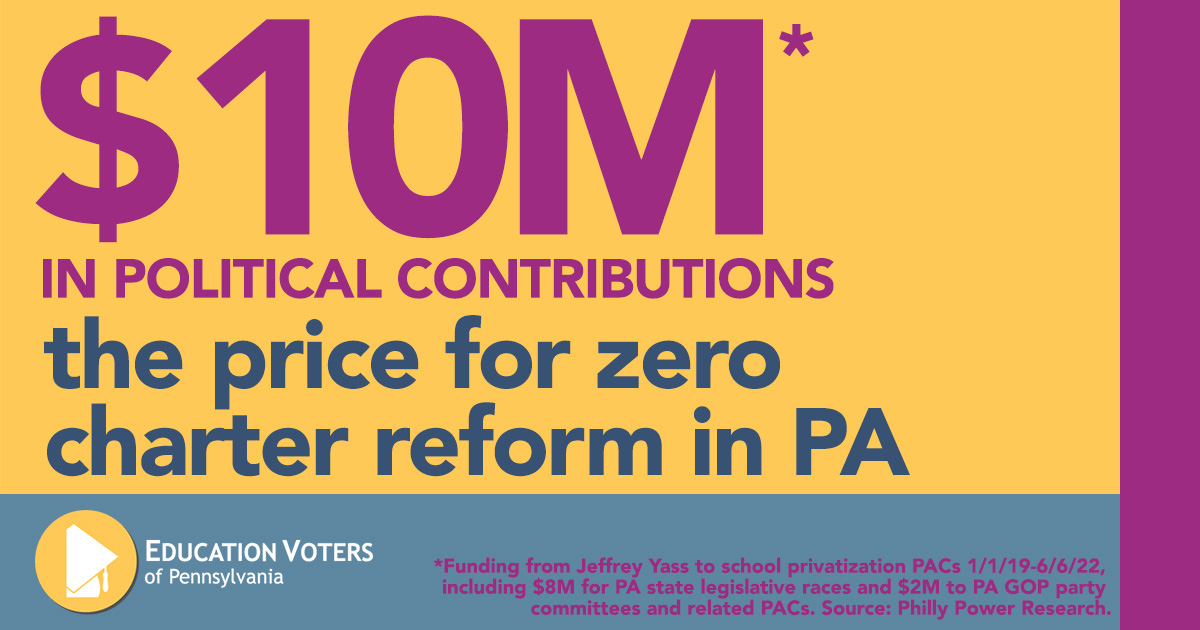 The Wolf Administration’s charter school regulations were tossed as part of the budget deal with Republican leaders, who stridently opposed the regulations every step of the way. This is a huge disappointment and leaves bad actors in the charter school sector free to continue cheating, stealing, and discriminating against students.

Republican leaders also refused to allow a vote on charter school funding and accountability reforms that would have more closely aligned charter school tuition rates with charters’ actual costs to save taxpayers $373 million. This means more parties at Dave and Buster’s for cyber charter school students and higher property taxes for all of us. Generous campaign donations from school privatization interests certainly paid off this year.*

THE UNACCEPTABLE (AND VERY SAD FOR PENNSYLVANIA’S FUTURE)

The budget includes a tax cut that will decrease Pennsylvania’s corporate tax rate from 9.99% to 4.99% over the next eight years. Lost revenue will mushroom to $2.25 billion PER YEAR by 2031. Our allies from the Pennsylvania Budget and Policy Center made this statement about the impact of this corporate tax cut:

Over the long term, this corporate tax cut, on top of the $4 billion per year in tax cuts corporations have received over the last fifteen years, will lead to tax increases on working and middle-class Pennsylvanians. And it will make it impossible for us to fully and fairly fund education at all levels, to help all Pennsylvania families secure a decent standard of living, to fix our infrastructure, and to protect our environment, and guard against climate change.

The huge corporate tax cut reveals the Republicans’ pose as guardians of responsible budgeting to be a bad joke. They claim credit for putting $2.1 billion in the Rainy Day Fund. Yet that’s less than the revenues that will ultimately be lost, year after year when the corporate tax cut provisions are fully in place.

While there are parts of this budget that are very disappointing, the work of advocates in every corner of the commonwealth this year enabled an increase of $1 billion in funding for K-12 schools, including $225 million in Level Up funding that will be directed to the schools that have the greatest need. This is something to celebrate!

I am so proud of all of us and am deeply grateful for your tireless efforts to support our local public schools.

Translate »
Manage Cookie Consent
To provide the best experiences, we use technologies like cookies to store and/or access device information. Consenting to these technologies will allow us to process data such as browsing behavior or unique IDs on this site. Not consenting or withdrawing consent, may adversely affect certain features and functions.
Manage options Manage services Manage vendors Read more about these purposes
View preferences
{title} {title} {title}